Farming Apps- Why are they vital to present-day Crop Production?

Although as ancient as the history of humankind, agriculture is a sector that has recorded unhurried transformation through the centuries. To date, practices on and off the field continue to be highly conventional and involve much human labor, especially in developing countries. In the wake of technology disruption, many farms and agribusinesses are slowly adopting technology into farm operations as it has a considerable impact on productivity and efficiency to say the least.

Advanced farming technology, or Agri Tech/Ag Tech as it is more popularly referred to, has proven to ease the effort involved in farming and related operations, all the way from farm to fork.

There are no second thoughts about the fact that innovation and technological intervention are the primary keys to agricultural development. To this end, it is crucial to realize the true potential and necessity for stronger connections among research, farmers, and their associated brands. Some of the important innovations in agriculture include modern greenhouse practices, artificial intelligence and precision agriculture, and blockchain, to name a few.

As one of technology’s most prominent offspring, the Smartphone has established its practicality and versatility in a myriad of sectors, including offbeat and conventional ones such as agriculture. By placing vast expanses of farmlands right on the palm, agricultural apps are revolutionizing the way fields have been tilled and harvested. Furthermore, the digitalization of agriculture has enabled not just the farmer, but also stakeholders at various levels of the agri-ecosystem to get the upper hand on the process involved in the food production and supply chain. Agribusinesses and other agricultural entities, both governmental and non-governmental, are turning to various software and hardware tools for digital farming such as farm management solutions, the Internet of things (IoT), and other forms of precision agriculture.

Going beyond the usage of mobile applications!

Leverage our Farming Apps to digitize your farms and enable data-driven decision-making.

Modern technology in agriculture is more than just the usage of mobile applications or a hardware system to automate redundant processes and reduce dependency on human labor. Although options are quite limited at present, users of smart farming technologies opt for a UI/UX that is both flexible and extremely convenient to use. This ranks higher on the priority list especially when agribusinesses operate across geographies and employ people with different levels of tech proficiency.

“Does this agri-solution save time and money for my business?”, asks the CEO of an agribusiness. The discussion moves ahead only if the answer is positive, getting into details of what the solution can do for the organization. Businesses that are already accustomed to a system prefer an agricultural solution that can marry and coexist with the existing one, instead of having to replace the one in place and retrain the entire staff. Such a solution thus makes its mark as- economically viable and easy to customize.

Farming Apps- To make every Farm and Crop Traceable

It was in 2010 when the core team of Cropin came together with the idea to transform Indian and global agriculture—to make it more productive and profitable for the marginal farmer. By pooling their expertise and tech capabilities, Krishna Kumar and Kunal Prasad designed the first of Cropin’s agriculture solutions, ‘Cropin Grow (SmartFarm)’.

Cropin Grow is a robust and flexible farm management solution that incorporates end-to-end solutions for data-driven decision-making for multiple stakeholders in the agri-ecosystem. Its real-time satellite- and weather-based advisory enables accurate output predictability for agribusinesses and other agricultural organizations while making businesses and farm operations exceedingly efficient.

Keeping track of processes involved in pre-and post-harvest has never been easier, with Cropin Grow's traceability capabilities powered by smart crop reports and insights for easy reporting on the go. By recommending a customized package of practices for each crop, Cropin Grow also ensures sustainable farming for produce that is high in both quality and quantity, by using only the right inputs at the right time.

More importantly, SmartFarm’s geo-tagging feature enables accurate measurement of farm acreage and also helps to log alerts for pest infestation and diseases from the precise location. This not only helps to focus on only the area but also saves a considerable amount of time otherwise spent on identifying the location and spread of the disease or infestation. Cropin Grow also ensures adherence to global standards of compliance and certification for the hassle-free export of fresh produce to international markets. 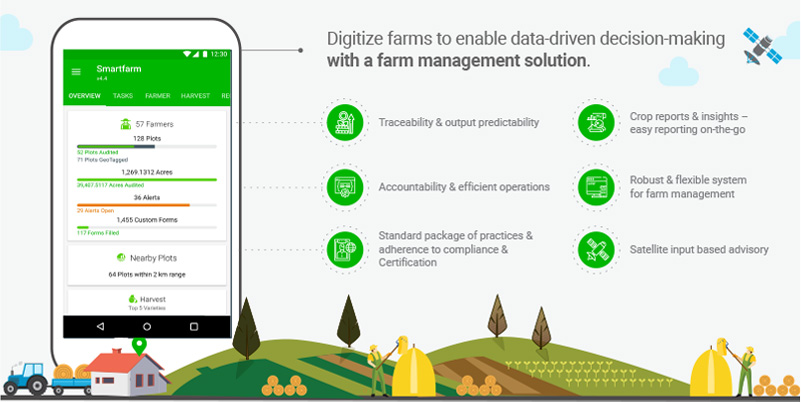 The platform has been recognized numerous times on Indian and global platforms for its capabilities, and stands as a clear choice for 200+ clients worldwide. Some of these accolades include: ‘Best Innovation in Digital Farming Technology’ by Agrow Awards in London, Finalist in the Rabobank Food Loss Asia Challenge in Singapore, and ‘Application Specialist’ at the Dell SME Channels Conclave and Awards, in New Delhi.

A pack-house solution that enables inventory management and food traceability

SmartWare is a pack-house solution that brings about the digitization of various warehouse processes and gives visibility into processes in a warehouse, regardless of their magnitude or their physical location. Users can now manage, process and audit the inventory without having to visit the warehouse and manually locate the area or item of concern.

In addition to this, one can scan the QR code on processed items in the warehouse to know the movement of the item all the way from the farm, to enable traceability in agriculture. Firstly, farm-to-fork traceability helps with quality control, wherein issues in the food supply chain can be identified before they can cause irreparable or severe damage. Secondly, it builds trust among consumers of the product when they are aware of the processes that went into bringing the produce to their table and can decide for themselves if a product is safe for consumption or not. 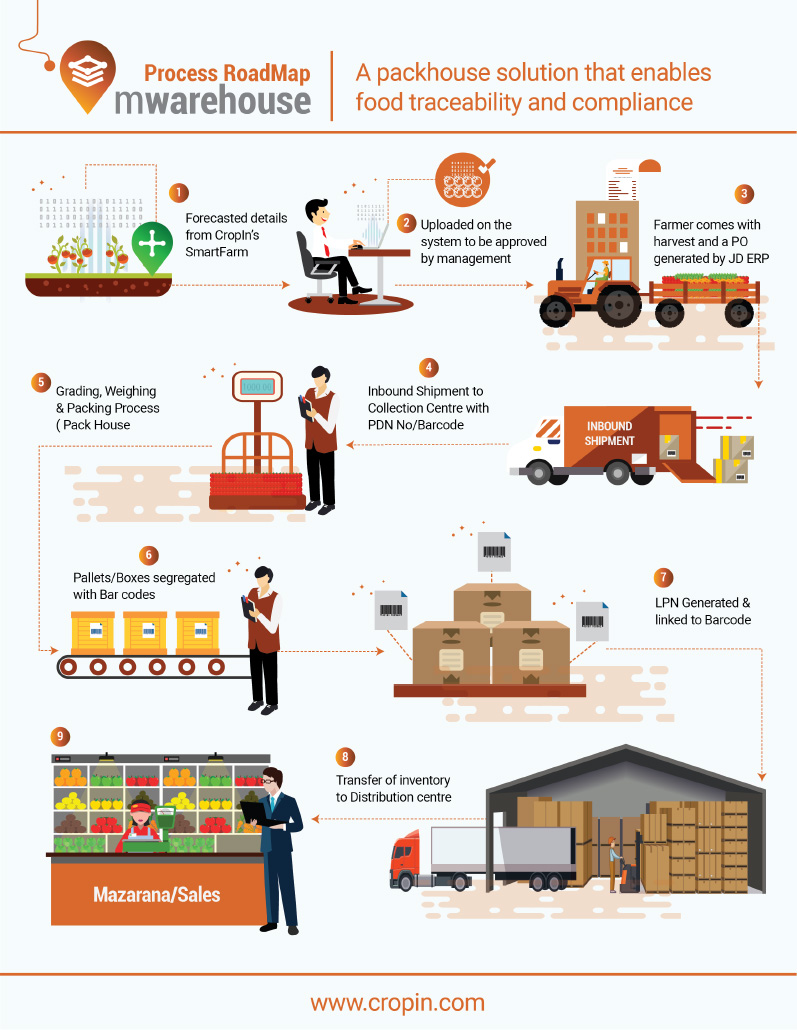 Get production risks and forecasts with an agri-business intelligence solution.

One of the major reasons why agriculture is not as sustainable or productive as expected is that there continues to exist an element of unpredictability. Unexpected changes in climatic conditions around the world lead to numerous problems including droughts, flash floods, storms, and a major rise or dip in temperature which can also lead to an incidence of pest infestation or crop diseases. With the increasing difficulty in forecasting the future and preparing in advance for events such as these, farmers and agribusinesses are at a loss.

To monitor and mitigate such risks, Cropin launched its AI- and ML-powered platform ‘SmartRisk’ in 2018. It is a predictive and prescriptive solution with capabilities to detect cropping patterns and predict the future of a crop. This forecasting intelligence highlights the associated risk and opportunities for various Agri-stakeholders, such as banks and NBFCs, insurance companies, commodity traders, sourcing managers, and government bodies too. These stakeholders can leverage easy-to-use connector APIs to achieve farm-level crop detection and yield prediction and also analyze the historical performance of every pixel at the farm/postcode/state/country level to monitor risk in real-time.

SmartRisk’s capabilities as a business intelligence solution for effective risk mitigation and forecast were recognized by HDFC Bank’s Digital Innovation Summit towards the end of 2018.