Harvesting Gold in The European Union

Wheat in its various forms has become the staple diet for over a third of the global population. When milled into flour, it contributes to nearly 20% of humans’ calorie and protein intake — much more than any other single food source. Continue reading to discover how Cropin's agtech solutions can help overcome challenges in wheat production. 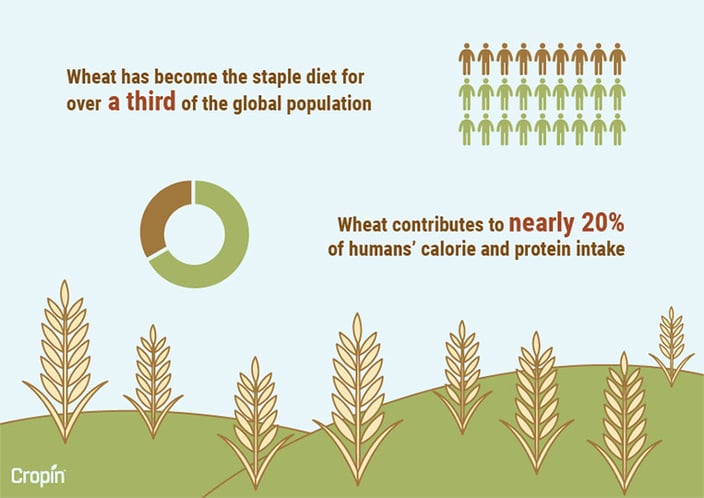 The Neolithic Era, beginning around 10,000 BCE, marked the rise of human civilization and the simultaneous evolution of agriculture. Wheat was one of the earliest wild grasses to be domesticated at around 8500 BCE in the Middle East, in a region now known as the Fertile Crescent or the “Cradle of Civilization”. In the years that followed, advancements in selective wheat breeding allowed early gatherers to cultivate specific varieties of grains that were easy to process, and later trade them with neighboring regions.

Today, following millennia of breeding, advancements, and research, wheat is recognized as a staple food globally and can be cultivated throughout Earth’s temperate zone, anywhere between sea level to up to an elevation of 10,000 feet.

Europe Today At A Glance

Globally, crop agriculture has progressed from one farmer feeding 25 people fifty years ago to the same farmer feeding 155 people today. The advancements in the last two centuries have ensured increased efficiency and higher production being achieved by fewer farmers.

In the European Union (EU), half of the farms and nearly a third of the agricultural area is utilized to cultivate cereals, so much that they account for a quarter of the EU’s crop production value. Among those, wheat, barley, and maize together comprise 90% of the continent’s cereal production. Globally, Europe accounts for 20% of the total cereal production.

The EU currently ranks first among the wheat-producing regions of the world with an estimated production of over 151 million metric tons as of July 2019. Western European countries including France, Germany, the United Kingdom, Italy, Spain, Portugal, Belgium/Luxembourg, the Netherlands, and Denmark produce the highest yields in the world. Although drought conditions had brought cereal production in 2018-19 to a six-year low, the yield prospects for the current seem promising, with the total wheat production estimated to reach 142 million tons (a 10% increase compared to the previous year) given the fact that weather conditions remain favorable until the end of the harvest.

Producing a new variety of wheat can take nearly twelve years of lab and field tests, costing up to $500,000 per new seed variety before it is made commercially available to farmers for production. These new varieties are typically cultivated for about a decade before a new one may be needed.

Scientific discoveries and technological advancements in the 20th century brought about an accelerated transformation in agriculture that resulted in intensive production systems. However, the sector is faced with numerous challenges that impact productivity and, to some extent, threaten food security.

Pests and diseases
Pests and diseases are common causes of crop loss each year. However, a recent study reports a 50-100% increase in pest-induced crop loss in Europe as insects thrive in a warmer climate in temperate regions. Diseases such as wheat rust can ruin up to 100% of untreated and susceptible wheat crops merely weeks before harvest. According to the FAO, wheat rust has adapted to warmer temperatures and become more destructive than before.

Climate change
Global warming has triggered an increase in the frequency of weather extremities that have deeply impacted agricultural production the world over. Unpredictable and heavy rainfall, drought, unnatural rise in temperature, wildfires caused by the recent heatwave in Europe, and unusual winds in certain parts of the continent have caused a decline in crop yields, and have become a threat to food security. Simulations conducted by a team at Wageningen Economic Research (WEcR) project that climate change will cause a decline of 0.66% in crop production by 2050.

A temperature rise of 1 °C results in a net productivity decline of 4.1 to 6.4% in global wheat yields.

Poor returns to farmers
Production costs for wheat have increased in the last few years due to high-priced plant protection products, and an increase in the cost of energy. Farmers are also required to invest more in precise and sophisticated equipment to improve efficiency, which results in lower net profit for the farmer.

Environmental sustainability
Intensive crop production in Europe demanded the use of large amounts of natural resources to sustain production requirements. In addition, poor agricultural practices and ill-advised application of fertilizers, pesticides, and fungicides have degraded the quality of these resources. These factors have also led to the decline in crop yields in many parts of the continent.

Reduced seed quality
Climate change is one of the key factors that affect the quality of seed — be it the seed being produced by seed manufacturers or the grains being cultivated for human consumption.

Significant changes in weather patterns are not only having a negative impact on conditions most suitable for a healthy harvest but are also increasing the incidence of pests in many regions.

Advancements in wheat production have been around since the 1800s in Europe, where science and agriculture technology have together helped to address some of the issues that continue to bridle the continent from achieving its maximum potential yield. While precision agriculture tools have facilitated an increase in efficiency and lowered the dependence on human labor, revolutionary R&D in seed production has enabled the creation of varieties that are more resilient to adverse conditions and ensure better yield that consumes a significantly lower amount of resources too.

The dawn of the fourth agricultural revolution or “Agriculture 4.0” has also introduced agtech solutions such as Cropin’s that drive the global agriculture sector to achieve the 70% increase in its production required to feed the growing population.

Cropin facilitates seamless collaboration between the various stakeholders in the agri-ecosystem by providing a transparent and centralized digital platform. The innovative system leverages ground data through farmers along with weather and satellite data to better predict crop situations and prescribe scientific advisories to the farmers.

What is the Fourth Agricultural Revolution? Learn more here:
Agriculture 4.0 — How Technology Is Helping Build Digital Farms of the Future

In addition to the above, Cropin also strengthens traceability along the agri supply chain by providing access to an extensive report on the journey of the crop from sowing to harvest — including details of the farmer, the seed, the exact location of the farm the crop was harvested from, the application of agri-inputs, alerts raised and resolved, and lab reports of the crop quality.

Cropin’s AI-led decision intelligence solution enables stakeholders in the BFSI sector to analyze crop health in real-time and estimate the yield accordingly, to hedge risks and arrive at prudent lending decisions. Furthermore, the agtech platform establishes both the historical and current performance of the farm or the region at the postcode/state/country level to give insights at a fraction of the traditional cost and effort.

Cropin’s bouquet of agtech solutions caters to the unique needs of every stakeholder in the agri-sector and allied services. Having digitized over 5.5 million acres of farmland across 46 countries, Cropin manages data on 384 crops and 3,662 crop varieties and has enriched the lives of nearly 2.1 million farmers globally.

To know how CropIn can cater to your requirements, talk to our in-house expert today.

Know more about our platform