What did a taller soy plant say to its bonsai soy plant buddy to make it feel better?

Soy not sorry for the bad pun. This blog is all about that particular species of legume that has been a major source of protein for farm feed globally, which in turn becomes a direct source of protein for human consumption as well. The soybean, economically is one of the most important beans in the world, acting as a source of vegetable protein for major parts of the world population and an important ingredient in many chemical products.

Soy crop’s origins can be traced back to 1100 BC, cultivated in parts of Southeast Asia. From there, it moved towards Japan and neighbouring regions until 1768 when a British colonist planted the first soybean seed in the British colony of Georgia. Since then, the crop has been grown extensively in major parts of Latin America and Europe. Today over 80% of the total soy production comes from the Americas. The largest soy exporting countries are the United States, Brazil, and Argentina. China, the EU-28 countries, and Southeast Asian geographies are the major importers of soybean.

According to plant breeding methodology, the production potential of a cultivar is directly proportional to the availability of an optimal conditioned environment for the crop. However, the change in climatic conditions, biotic and non-biotic alter the optimal conditions, rendering this methodology to be redundant and the farmers now look for technological intervention to adapt to the change. In order to reduce stresses on the soy crop and maximize its productivity, farm management solutions that provide management practices ranging from the choice of the soy variety best suited for the land, soil analysis, fertilizer, and pesticide management coupled with market intelligence are the need of the hour.

The soy production in Latin American geographies like Brazil, Argentina, and Ecuador has seen a rapid increase due to increased demands and its versatility in usage, in the last decade. Soy is not just used for feed but also for the bio-made products that are commercially marketed. Soybean is an ideal crop to restore fertility to degraded pastures due to its capacity to fix nitrogen from the air using bacteria in the root nodules. However, the change in land usage has led to deforestation involving the cultivation of soy, and has raised serious concerns in the conservation of the Amazon forest regions of Latin America. There needs to be a regulation and the very important aspect of traceability in this regard.

The increasing temperatures in Brazil have brought down the soy yield dramatically and this threatens to impact the major contribution of soy crops to the Brazilian economy. Although scientists are working on developing genotypes of soy that are resistant to high temperatures and adapt to low water conditions, one must always remember the limitations of genetic improvements from the natural strains.
The most common challenges to smallholder farmers who have grown soybeans over the generations are restricted access to farm management frameworks due to limited access to technology, restricted or no access to automation in farming (due to high costs) incessant development of their zones, capital limitations based on collateral requirements, lack of knowledge on market linkage and intelligence. 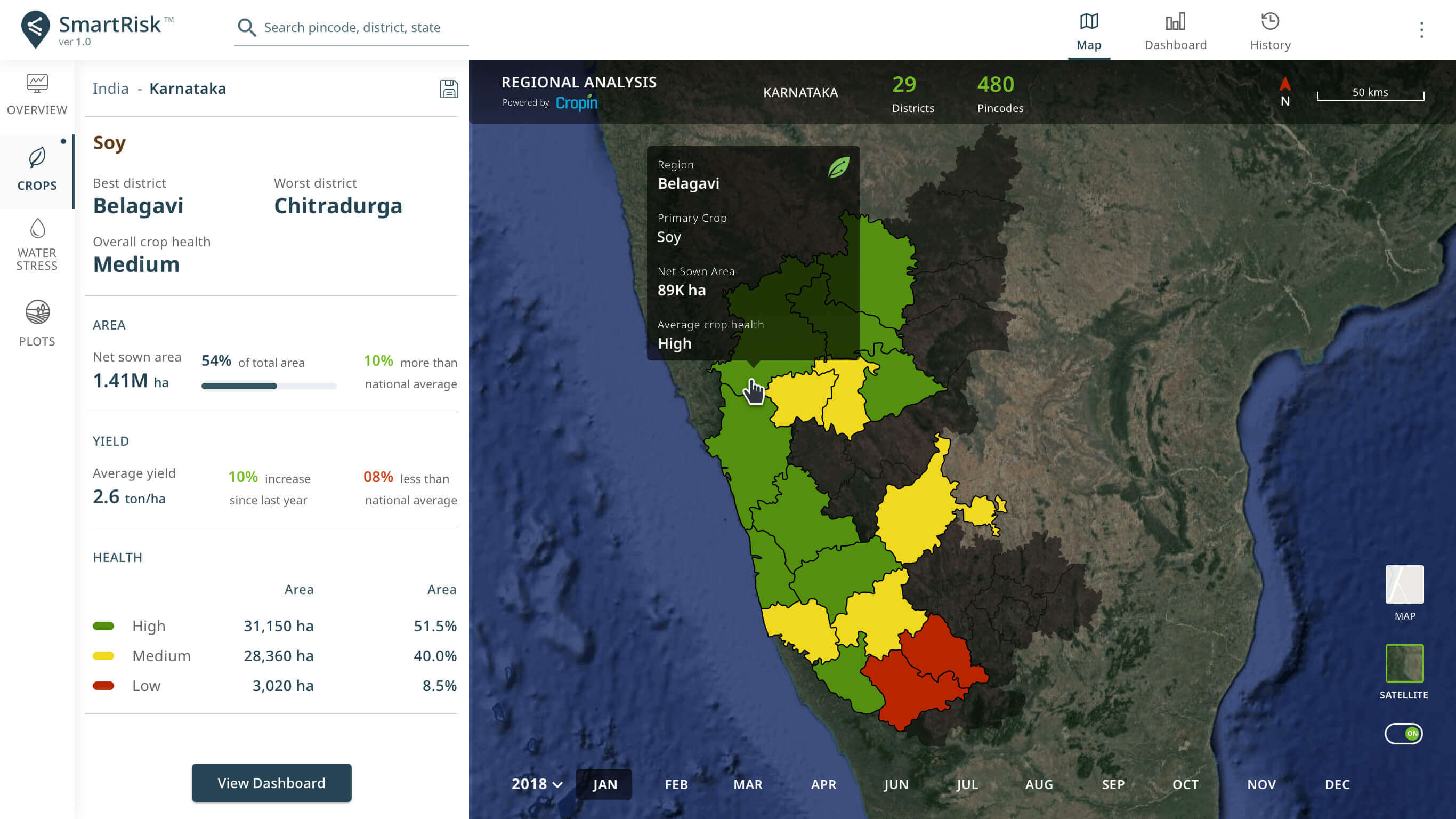 The solution that CropIn has recommended for a sensitive crop value chain such as soy would be a credible and feasible traceability and supply chain management system which can track each farm process involved in the value chain and connect each stakeholder in the soy chain through an AI-driven platform. The system should be able to capture the details of the non-pre financed soy suppliers regarding their farming practices and compare the sustainability parameters as defined by the government and other compliance agencies. This ensures maximum productivity, achieved through sustainable methods.

CropIn has in the past, has successfully implemented solutions to enable the soy value chain with capabilities of improved productivity and efficiency in functionality. CropIn’s pioneering product suite, SmartRisk transformed the soy value chain for one of the CropIn’s prestigious client by utilising high-frequency satellite imagery and cadastral mapping-based opportunity identification and provided the complete picture of a specific landholding by analysing a variety of data points — from chlorophyll index and NDVI values to water stress. CropIn leveraged SmartRisk™ to predict the yield and provide production forecasts for the client and was able to bring a radical change in productivity levels and connect stakeholders across the soy value chain for the client.

CropIn’s newest technological marvel SmartFarm Plus for instance, is a pioneering product that would be a true game-changer in soy crop value chain management. SmartFarm Plus harnesses the power of AI and ML technologies to deliver high-performance deliverables to the farm.

By using smart agriculture solutions like SmartFarm Plus & SmartRisk, various influencing factors such as water stress level, crop health, soil fertility, oxygen content, temperature, etc can be regulated to the standardised, optimal conditions for the crop to grow. These platforms are adaptive in nature; they are designed using self-learning models, which makes the farm self-sustaining. The emphasis is laid on analysis of the land and a customised advisory that focuses on the particular variety, land condition, and cognition.

The most important aspect of traceability can be achieved using SmartFarm Plus, thanks to its integrable capabilities. Various tech implementations that are in action at various steps of the soy crop value chain can be connected together through seamless integration on SmartFarm Plus. This means the farmer has transparency in each stage of soybean production.

Land usage analysis ensures excessive deforestation is avoided and there is a regulatory system to track if the production is in compliance with the Govt regulations.
Traceability also ensures there are sustainable practices that have been followed in the production and the advisories are in compliance with the SDGs prescribed by the United Nations.

The soy value chain holds high importance in the economies of Latin American geographies. Digitization of soy farms is truly the saviour of not just the smallholder soy farmer communities, but the lush green and dense Amazon forests which are the life of innumerable endangered species of plants and animals. To know more on the amazing possibilities of how soy value chains can be impacted using technologically advanced, futuristic implementations, get in touch with us now!

*The given dashboard is for illustration purpose only ”