Climate change is a serious and pressing issue that humanity faces in the world we live in. It has had a wide and visible effect on urban society, affecting a wide range of industries. Summers are hotter, winters are colder, and the ice caps in the poles have retreated considerably, all of which induced by rising global temperatures. One of the primary drivers of this global warming effect, and climate change as well, is the rising levels of greenhouse gases (GHG), including carbon dioxide, methane, and nitrous oxides, in Earth’s atmosphere.

GHG emissions from human activities have increased over time and have wreaked havoc on our planet’s ecological equilibrium. Scientists have identified several indicators from around the globe that point to the cause and effects of climate change. The consequences of climate change triggered by GHG emissions include extreme weather conditions, rising sea levels and coastal flooding, increased threat to human health due to reduced air quality, indirect rise in the spread of diseases, and intensified wildfires.

GHG emissions also are a challenge when it comes to agriculture. The nature of these gases can affect soil fertility and crop health and alter the conditions for optimum growth of the yield. Conversely, the manufacture and use of agricultural inputs (such as fertilisers and pesticides), farm equipment, soil disturbance, and poor irrigation practices account for the majority of agricultural GHG emissions. Although agriculture contributes to climate change by emitting greenhouse gases, it is also negatively impacted by shifting weather patterns.

To ensure clean energy is generated through sustainable methods and to minimise the effects of carbon GHG emissions, growers have started adopting a path-breaking solution called Carbon Sequestration.

What is Soil Carbon Sequestration?

Also known as carbon-dioxide removal (CDR), it is the long-term process of removing carbon dioxide from the atmosphere and storing it long term in biological systems, geological formations, or industrial products. The process slows down atmospheric CO2 pollution and possibly reverses global warming. Some of the effective methods include afforestation or reforestation, bioenergy with carbon capture and storage (BECCS), agricultural techniques that increase soil carbon storage, and the use of CO2 in biofuels, chemical polymers, and building materials.

The specific term for the potential or the use of soil, land use, land-use change, and forestry to reduce the greenhouse effect is soil carbon sequestration. In agriculture, the process is also termed as “carbon farming” or “regenerative agriculture”, and comprises diverse methods to manage farmland in a way that soils and vegetation can increase the absorption and storage of carbon.

According to a special report by the United Nations’ (UN) Intergovernmental Panel on Climate Change (IPCC), soil carbon sequestration in croplands and grasslands is one of the options with highest potential for CDR where up to 8.6 gigatonnes of CO2, or more than 20% of current greenhouse gas emissions, can be sequestered annually as carbon locked away in the soil. On the other hand, agricultural and livestock management could mitigate up to 3.4 gigatonnes of CO2 every year. An additional benefit of this process is that with the increase in soil carbon, the soil fertility also improves. Therefore, nutrient retention becomes more effective, the soil can hold moisture for much longer, and its density is reduced.

How Does Soil Carbon Sequestration Work?

Plants absorb CO2 from air during photosynthesis to produce their food in the form of sugars, and release oxygen as a by-product. Their tissues then store the carbon until the plant is absorbed into the soil or when they decay naturally, at which point CO2 is released back into the environment. While increasing the capacity of the plant biomass to absorb and store carbon is a sure way to mitigate climate change, the focus of soil carbon sequestration is primarily on management practices that enhance the amount of carbon stored as soil organic matter (SOM), especially in farmlands and grazing lands 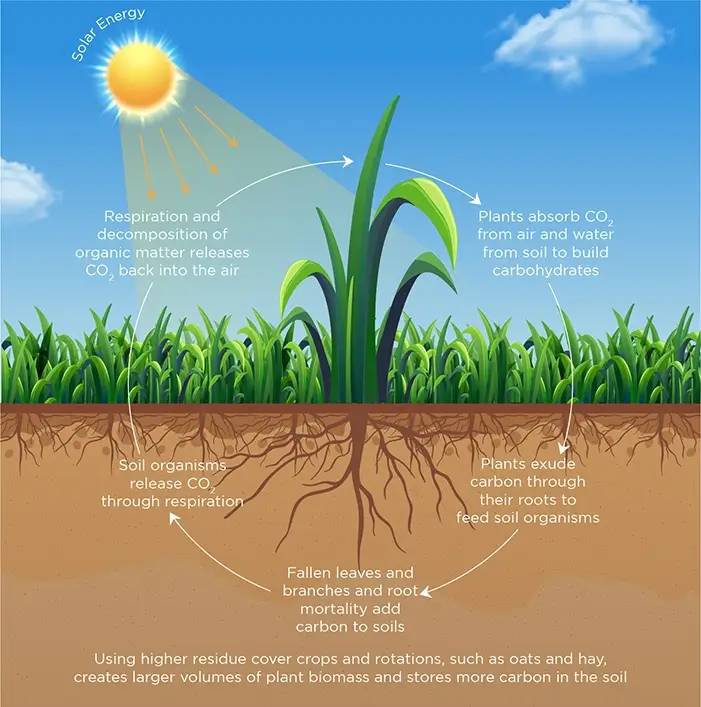 Plants also convert atmospheric CO2 into a stable, solid form of carbon and store it in the soil by means of direct or indirect fixation. Direct fixation is the natural conversion of CO2 into soil inorganic compounds (SIC), which are primarily calcium and magnesium carbonate. Meanwhile, indirect fixation occurs when the biomass that plants produce through photosynthesis is eventually transferred into the soil. The carbon is then indirectly sequestered as soil organic carbon (SOC) when the biomass decomposes. Soils hence have the potential to offset GHG emissions if the carbon they help accumulate in the soil is greater in volume than what is released back into the atmosphere.

SOC stocks are a primary indicator to assess soil carbon sequestration as they are proportional to the amount of soil organic matter. Improving SOC stocks helps to reduce and even offset CO2 emissions. The capacity to store or increase SOC depends on several factors, including climate, soil characteristics, and land use and land-use change. One of the methods to enhance SOC stocks in croplands is by decreasing soil disturbance. On the contrary, unscientific ploughing or tilling leads to a decrease in the SOC stock and the release of the accumulated CO2 back into the atmosphere. This process, when scaled to a global level, will contribute to the rising levels of GHG emissions and increased soil infertility.

Hence, it can be inferred that enhancing carbon sequestration in soil is associated with increased biomass and, therefore, to soil fertility. Improving soil fertility is probably another effective method to rapidly increase carbon sink capacity, and cultivating certain crops can contribute to nitrogen fixation, thus increasing the availability of compounds in soil and making it more fertile. Planting the right crop based on the geographical nature of the soil will ensure the carbon in the soil is contained. The roots of certain crops can bind the soil and hold the carbon levels in the soil at the right level.

The origin of Carbon Pricing and Carbon Credits goes back to the UN Framework Convention on Climate Change (UNFCCC) that took place in Japan in 1997. The world’s nations reached an agreement that an effective way to reduce CO2 and other GHG emissions was by way of carbon credits. While the convention encouraged industrialised nations to stabilize their GHG emissions, the Kyoto Protocol that was adopted that year committed them to do so. Under this protocol, which has been approved by 192 countries till date, 37 industrialised nations, along with the European Community, committed to cutting down their emissions.

The phrase “put a price on carbon” has gained momentum in several countries as a mechanism to reduce emissions and encourage investments into cleaner options. In this regard, there are two primary types of carbon pricing, as listed by the World Bank: emissions trading systems (ETS) and carbon taxes. An ETS is a cap-and-trade system, where a cap is set by law, in the form of a set amount of permits, to limit GHG emissions from factories or utilities, and those with low emissions can trade or sell unused credits to larger emitters. Thus, ETS determines a market price for GHG emissions and ensures a reduction in the emission on the whole. Alternatively, a carbon tax is a fee that governments impose on any company that emits GHGs. It encourages businesses to switch to clean energy or adopt new technology solutions to avoid paying the tax on the emissions. Unlike the ETS, the level of emission reduction that the companies need to achieve is not predefined, but the price on carbon is.

In the agri-sector, several companies globally have implemented the carbon credit mechanism, where they incentivise farmers for adopting climate-smart practices. These projects educate farmers on and promote sustainable agricultural land management practices for soil carbon sequestration, such as cover crop planting, tree planting, no-tillage farming, precision nitrogen use, and returning organic material to the cultivated farmlands. Not only do these practices contribute to environmental benefits by improving soil carbon storage, but they also generate socio-economic benefits for the farmers by increasing their harvests and, hence, their profits.

There are many ways farmers benefit monetarily from these projects. For instance, Bayer AG’s Crop Science Division is rewarding nearly 1,200 farmers in the US and Brazil with half a million acres of land between them for adopting climate-smart practices. US-based global food corporation Cargill has dedicated resources to support farmers who adopt regenerative agricultural practices and is seeking avenues for farms to profit from their efforts to sequester carbon. Syngenta Foundation, on the other hand, is engaged in projects in Zambia and Kenya, supported by the World Bank’s BioCarbon Fund. Syngenta, through its Good Growth Plan, also works with farmers to measure and enable carbon capture and increase soil health by way of climate-smart agriculture practices.

The Sustainable Development Goals (SDGs) prescribed by the UN are meant to be guidelines for a sustainable tomorrow. One of the SDGs, Responsible Production and Consumption focuses on sustainable methods of production where scientific paths, arrived through data-driven analysis, are encouraged to be implemented on the farmlands. Carbon sequestration is one of the recommended processes of cultivation by the UN SDGs since the method is extremely effective and contributes towards building a better tomorrow for agriculturists worldwide. Agribusinesses should definitely consider bringing carbon sequestration as a mandatory stage of cultivation into their fields. The result is a win-win for us and mother nature!

Know more about our platform