Farmer producer organisations (FPOs) are agricultural cooperatives that are emerging as a practical approach towards empowering a great number of smallholder farmers and ensuring their prosperity. In countries where agriculture is the primary source of income for millions of farmers, they play a significant role in improving marginalised farmers’ access to resources, which further helps boost their agri-productivity and their incomes.

Over the past decade, the Government of India has introduced various initiatives through agencies including Small Farmers’ Agri-Business Consortium (SFAC) and National Bank for Agriculture and Rural Development (NABARD), National Commodity and Derivatives Exchange (NCDEX), and the various State Governments and NGOs. Presently, these agencies have established over 5,000 FPOs across the country with up to a thousand members in each of these organisations. Several of these FPOs have been successful in making agriculture profitable for thousands of farmers. Besides, earlier this year in February, the Indian Government introduced a new Central Sector Scheme that aims to create and promote 10,000 FPOs. Under the new scheme, the members of FPOs can avail relevant benefits such as Credit Guarantee Fund and advisory services from Cluster Based Business Organization (CBBO) and the National Project Management Agency (NPMA).

Small farmers as individuals face diverse challenges such as poor income, limited or no access to the right inputs, inadequate knowledge of modern farming techniques, and a lack of direct market access, among several others. In many underdeveloped or developing countries, several small farmers primarily produce for their subsistence and sell small quantities of the harvest when they face a need. These farmers often approach farming as a way of life rather than a business opportunity, which severely limits them from achieving the full potential of their farms. However, with the right support and guidance, they can bring about a tremendous transformation in the agriculture and food sector. This is made possible by farmer producer organisations that mobilise farmers in large numbers, build their capacity, and leverage their collective strength to enhance production capabilities and marketing opportunities.

For both governmental and non-governmental entities alike, an FPO is a means of actively engaging farmers in the development process. It provides an organised system to transfer modern-day technology, absorb them efficiently into rural development programs, and monitor their socio-economic progress. It also plays a critical role in creating sustainable employment for youth and women, and progress towards reducing poverty for millions of people.

The collective strength of this producer-led organisation offers several advantages. Firstly, it considerably improves their bargaining power by creating forward and backward linkages in the supply chain and enables them to benefit from economies of scale. By aggregating both their demand and supply, the members will now be able to purchase agri-inputs and sell their commodities at competitive prices.

Secondly, farmer producer organisations can facilitate linkage with various stakeholders, which allows members to gain better access to technical, technological, and financial support. As a result, the members of FPOs can adopt better agricultural practices, enjoy hassle-free financial support from banks, and leverage the infrastructure that is made available to them through the organisation. All of this combined makes it possible for them to significantly enhance their productivity and, therefore, the income too. The FPOs also empower them to hedge against potential commodity price fluctuations during harvest by leveraging available platforms.

Thirdly, organising producers into collectives makes it convenient for governments to bring them into the folds of digitisation and empower them with the benefits of various developmental policies. In the last few years, the Indian government has introduced several measures, such as the Equity Grant Fund Scheme, the Scheme for Creation of Backward and Forward Linkages, the Credit Guarantee Fund Scheme, and the National Rural Livelihoods Mission (NLRM) to promote and strengthen the FPOs. The objective of these measures is to make the agriculture sector more sustainable and prosperous by making effective use of the available resources.

The Role of The Private Sector

The last decade witnessed the launch of thousands of startups in the agriculture space. From delivering technological solutions that improve agri-productivity to ensuring superior market linkage, these organisations have been adding immense value to smallholder farmers in numerous developing nations. With farmer producer organisations being recognised as pathways to alleviate poverty and to encourage small farmers to adopt sustainable, climate-smart farming practices, several agritech startups are working towards effectively providing these farmers with as much assistance as possible. The structure of FPOs is such that it facilitates faster adoption of technology by its members, which goes a long way in transforming agri-food production within a comparably shorter period of time. The use of digital technologies helps the producer organisations achieve supply chain efficiency and provide the buyers of the produce with adequate quality and food safety assurances. 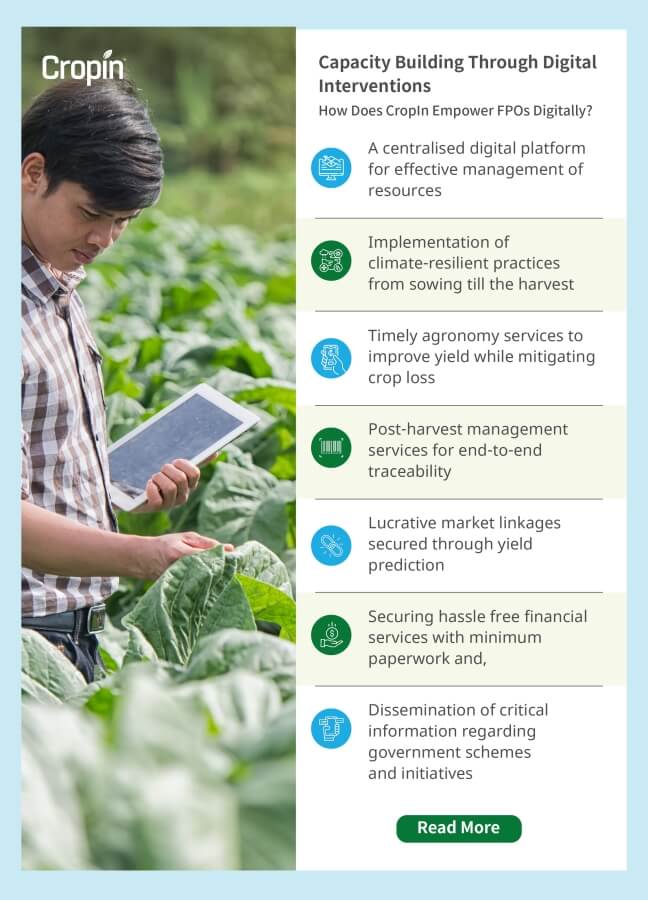 The Road Ahead For Farmer Producer Organisations

While FPOs continue to face several setbacks and are struggling to operate viably in many countries, continued support from governments and other organisations can ensure their sustainability in the long run. Their survival and prosperity are also highly crucial to bring about transformation in the food and agriculture sector in developing and underdeveloped countries, which is imperative to guarantee food security for future generations. With the implementation of the right policies, and with the support of all actors in the ecosystem, FPOs will soon be able to achieve sustainability and reap optimal benefits for its shareholders.

Interested to discover more? Give us a call today !