Unseasonal Weather Conditions Dampening Onion Supply Across India - Is There A Way Around?

From being worshipped as a symbol of eternal life by ancient Egyptians to using it as a currency for paying rent or giving it away as gifts in the Middle Ages, onions have played a significant role since 5,000 BC. In India, onion is one of the key ingredients used to flavor dishes at home and restaurants, making it a crop that is always in demand.

Today, India leads as the second-largest producer of onions in the world. The major onion-producing states of Maharashtra, Karnataka, Madhya Pradesh, Gujarat, Bihar, Andhra Pradesh, Rajasthan, Haryana, and Telangana produce enough onions throughout the year to support domestic daily consumption of 40,000-50,000 tonnes. Indian onions are also much sought after globally for their unique taste and, to meet the demand, the country exported fresh onions to the tune of 2.18 million tonnes worth USD 497.94 million during the year 2018-19.

However, this seasonal vegetable has hit the headlines recently for all the wrong reasons. Unseasonal winter rains have severely impacted the onion farming in states including Maharashtra, Karnataka, and Telangana among others. It further led to a steep decline in its supply, forcing the country to ban exports and rely on imports to meet consumer demands. Other crops such as potatoes and tomatoes were also affected by the unanticipated rainfall, resulting in immense losses for farmers.

Consequently, market prices of these crops have skyrocketed to an extent that onions are sold at INR 100 per kg in many places and even more in some others. These prices have reportedly increased by nearly 81% since November as domestic production during Kharif and late-Kharif (summer-sown) seasons has declined by nearly 22%. 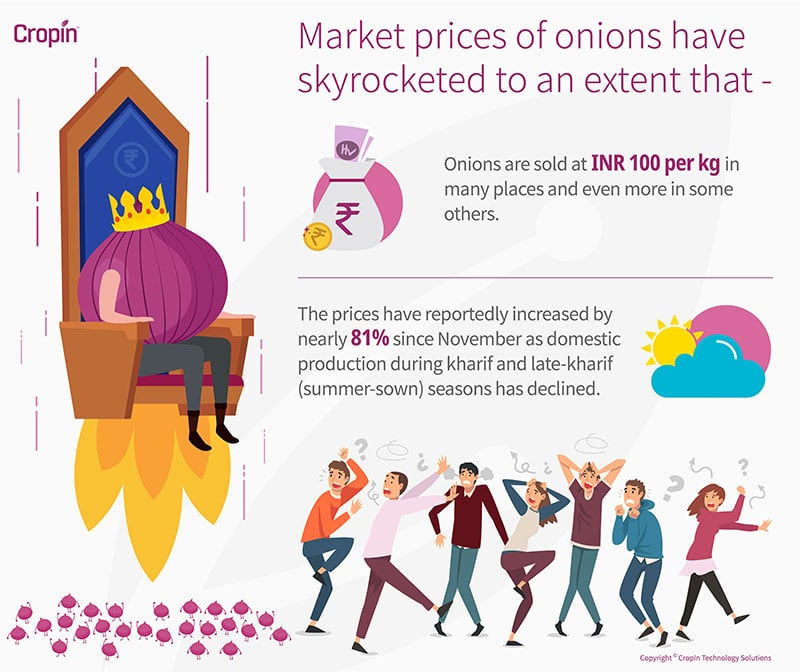 What Challenges Do Unseasonal Rainfall Pose?

Onion is primarily a cool-weather crop that can be grown in temperate, tropical, or subtropical climatic conditions, but requires well-drained fertile soils and mild weather for a healthy harvest. Immediately after harvest, the onions are cleaned and allowed to dry for a few days in the shade.

However, unexpected rain and resulting water-logged or wet fields prevent farmers from collecting harvest-ready crops, thereby causing a delay in the supply to markets. Rains also hamper the drying and curing processes, and onions that haven’t been dried thoroughly might rot during storage. Lack of adequate infrastructure or facilities to sufficiently dry and store the onions can further contribute to considerable post-harvest losses.

In addition to the above, poorly drained soils and cool, wet conditions are ideal for onion maggots to thrive. Onion maggots cause critical pest infestations in many parts of the country and lead to total loss of crop if left undetected or untreated. While unexpected rainfall only delays the supply of the onions to the market, maggots and other weather-induced pests and diseases cause a sharp decline in the availability of the produce due to crop loss, thereby affecting the market prices.

Surprisingly and contrary to the current circumstances, the early part of this year witnessed an excess of onion production, amounting to nearly 4 million tons more than the country’s requirement. An absence of clear visibility over how much was being cultivated across the country and the lack of a fitting export policy escalated the existing agrarian crisis.

The steep fall in market prices for onions because of the excess supply prompted farmers to switch to other crops, which prompted a decrease in onion supply the following season. This in turn pushed the prices up, benefiting those farmers who continued with onion farming and incentivizing more farmers to cultivate onion crop the season after that. This vicious cycle has been a heavy burden on farmers and consumers alike for nearly three decades and continues to plague the markets even today.

How Can This Crisis Be Prevented?

Modern agriculture technology solutions are providing farming communities around the world with end-to-end solutions to monitor and manage farm operations efficiently. The scientific approach to agriculture and its allied activities along the supply chain empowers farmers to accurately predict outcomes and manage nearly all aspects of cultivation — from planting and sowing to harvesting and supply chain management with much higher levels of certainty.

Cropin’s SmartFarm is a comprehensive farm data management platform that aids efficient farm operations. Among numerous other features, one that is widely sought after by farming companies, FPOs, and other farmer cooperatives is the 7-day weather forecast that facilitates farmers to schedule farm activities based on weather conditions for that week. This feature is particularly beneficial for farmers who cultivate onions and other crops often affected by unseasonal rains that result in extensive economic losses even before the produce reaches the market.

Cropin’s SmartSense is an early warning and climate advisory tool that can be configured specifically for each crop’s growing conditions. Based on the information provided by an agronomist, SmartSense could be configured to alert the field staff about specific combinations of weather parameters, such as temperature, humidity, and precipitation, which could lead to crop diseases or pest infestations.

For instance, the probability of blight diseases affecting crops is higher in warm temperatures, humid conditions, and long periods of leaf wetness. For effective management of farm activities to prevent crop loss due to such conditions, SmartSense can be configured to deliver crop-specific weather advisory. It also enables the farmers to get proactive and prescriptive advisories for their specific plots in the form of SMS notifications, based on the current and forecasted weather conditions.

Monitor and Estimate Yield in Real-Time

SmartFarm allows field staff to audit the farm area for an accurate measure of farm acreage. This not only allows the field staff to determine what quantity of agrochemicals or other resources need to be used but also helps provide a near-accurate estimate of the yield. SmartFarm provides users with yield estimates that are updated in real-time based on the various events and activities that occur at a farm level. Organizations can thus have a fair idea of what yield they can expect at the end of harvest, and thus manage their post-harvest activities efficiently.

Cropin’s SmartRisk is an AI/ML-based predictive solution designed using proprietary algorithms. It enables sourcing and procurement companies to detect what crops grow in a given region. Along with this, SmartRisk delivers an assessment of the acreage, insights on crop stage and health, and an estimate of the yield too.

Key players in the agri-food value chain can thus utilize this agri-intelligence platform to plan smarter and more efficient agri-commodity sourcing. On the one hand, real-time intelligence enables large enterprises to finalize procurement and manage supply-chain activities weeks before harvest. On the other hand, early engagement lessens the producers’ burden of post-harvest handling and storage and the significant loss that could occur when storing for an extended period of time. This direct engagement also helps farmers fetch a fair price for the produce by eliminating the middleman.